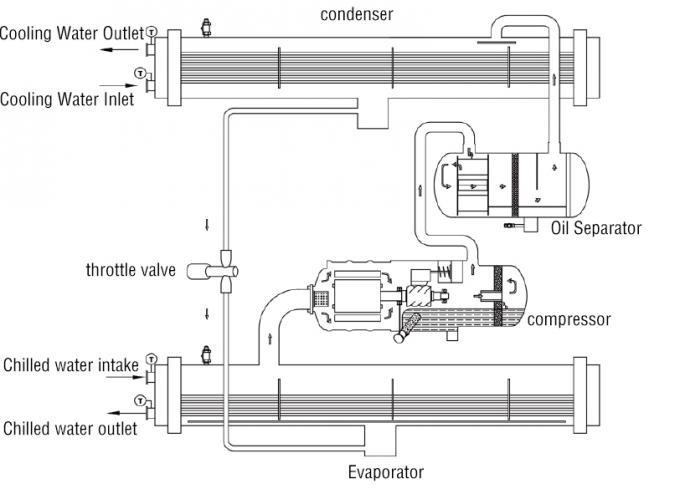 3. Throttling process: When the high-temperature and high-pressure refrigerant liquid from the bottom of the condenser flows through the throttling device, it undergoes decompression and expansion, the pressure and temperature are reduced, and it becomes a low-pressure, low-temperature liquid into the evaporator.

4. Evaporation process: The low-pressure, low-temperature refrigerant liquid absorbs heat from the refrigerant (such as cold water) in the evaporator and evaporates into gas, and at the same time reduces the temperature of the refrigerant, thereby realizing artificial refrigeration and refrigeration in the evaporator. The agent vapor is inhaled by the compressor for compression, and the above-mentioned compression, condensation, throttling, and evaporation processes are repeated. This cycle is repeated to achieve the purpose of continuous cooling (heating). The cooling capacity is proportional to the suction flow of the compressor. The screw compressor is equipped with a slide valve mechanism inside, which is used to control the suction flow of the compressor and the evaporation of the refrigerant, so that the cooling capacity can be adjusted steplessly within a certain range.

The reasons for the high voltage fault are as follows:

The cooling water temperature is too high and the condensation effect is poor;

The cooling water flow is insufficient and cannot reach the rated water flow;

The refrigerant is mixed with non-condensable gases such as air and nitrogen;

The reasons for the low voltage failure are as follows:

The outside temperature is low.

The reasons for the low valve temperature failure are as follows

A small amount of refrigerant leaks, generally manifested as a low valve temperature fault rather than a low pressure fault;

The expansion valve is blocked or the opening degree is too small, and the system is not clean;

The thermistor is embedded in the compressor motor winding, and the resistance is generally 1kΩ. When the winding is overheated, the resistance value will increase rapidly. When it exceeds 141kΩ, the thermal protection module SSM will act to cut off the operation of the unit. At the same time, the overheating fault will be displayed, and the fault indicator will be on.

The reasons for compressor overheating failure are as follows:

The overheat protection module M is damp or damaged, the intermediate relay is damaged, and the contacts are bad.

In particular, the interface is wet and oxidized, resulting in poor contact. In addition, the unit electronic board or the main interface board is faulty, the address dial switch is improperly selected, and the power failure can cause communication failure.

PREV: Whether there is air in the refrigeration system can refer to this calculation method
NEXT: No matter how urgent the cold storage construction period is, these places must be done well.